I don’t think I’ve ever documented my growing failures before, which is funny, because there have been A LOT of them. I think I’ve been embarrassed and I haven’t wanted my clients to think I’m sloppy or I don’t know what I’m doing. But when I think about it, I doubt my clients ever see the end result of these growing failures, since if I’m flowering a wedding or creating a custom bouquet I will do everything I need to – including purchasing wholesale flowers or from other farmers – to get them what I’ve promised. With that in mind, I’m hoping documenting this stuff will help other growers – especially beginners and people who are self-taught, like me – in their quest to get something – anything!- to grow.

So, in the interest of education for my fellow beginners/dilettantes it’s probably worthwhile to talk about what I f*cked up this year. It’s also in the interest of me, because documenting this stuff may be useful in the future and is a good exercise in reflection.

Basics about my farm:

I am in zone 5b, in western Massachusetts, and while this area of New England is known for its rich, Connecticut River valley soils, my farm is on top of essentially what is a big sand dune, in an area of Northampton called the Mineral Hills. Because the hills are made of minerals, which are rocks and sand. Not rich. Not flat.

I’ve been officially a farm (meaning producing flowers for sale) for about 4 years now. We’ve lived on this property for 5. The first year I fiddled around with some stuff but we didn’t move in until June, so basically I planted the perennials I’d brought with me from NC (including 20 peony plants – What, when you move you don’t dig up your peonies to take with you?) and sprinkled wildflower seeds all over a back section of our property that had been scraped clear for something or other.

The second year I cleared and planted, cleared and planted, focusing on what I thought I could grow for the farmers’ market, adding more perennials and experimenting. Year 3 I shifted my focus to weddings and added more perennials and doubled my 1/8 acre to 1/4 by clearing more and planting more. In 2019 I added another 1/4 acre and a heated/cooled studio and in 2020 I worked on maintaining and improving production and infrastructure.

I grow on about ½ an acre. ¼ of the acre is up the hill near our house and is in 3 main sections due to the lay of the land, and I sublease another ¼ acre of flat space down the hill from another farm. Here’s a picture I snipped from Google Maps.

When you look in this picture it probably looks like I could maximize space better, but you are looking top down and you’re not seeing the slopes.

The main growing failures of 2020 happened in that blob to the right, which is my newest planting area. Our property is what’s called a flag lot – basically, we own our driveway and the spot where we live, but we don’t own much roadfront. The roadfront that surrounds our driveway is owned by the city of Northampton. This 8 acre field is part of the Mineral Hills Conservation area and it has an agricultural use requirement, which I believe was part of the sales agreement or some rule that was put in place when the Conservation area was created. A dairy farm in Westhampton, Mayval Farm, leases that land and grows feed corn on it. They use a no-till method, which means that they use a tractor attachment that plugs corn seed directly in the ground in the spring, and in the winter it’s cover-cropped with triticale (a rye-wheat hybrid.) In the spring, when the triticale grows, they use glyphosate to kill the cover. As far as I know they only do this once per year. A couple times they come through and fertilize and they also sometimes spread manure. I don’t know how long they’ve been using this process but I’m sure it’s been many years. The land has some restrictions on it: either no-till or organic.

Anyway, while I’m a little uncomfortable about the glyphosate application in my front yard, a) I’ve been around farms that are far more liberal with their chemicals and feel like what they do is pretty conservative b) I know next to nothing about either growing seed corn or no-till growing of this kind of thing so wouldn’t want to guess how they could do it differently and c) they are very nice people and have been happy to sublease me my little bit of the field, and I also want to be able to slowly sublease more of the land as I grow so I need to keep the peace.

That said, I was concerned how the years of glyphosate application would impact what I grew. In 2019, when I started down there, I decided to experiment as cheaply as possible to see what would happen.  I didn’t know what the soil could support or if the glyphosate would make things grow weird. I also don’t have any real irrigation down there – all irrigation comes from up the hill at our house and is from our home well, and while the well driller assured me that more water went into the well than could ever come out, I still have my worries.

So – year one using this space (2019) I bought a little walk-behind tiller, tilled some rows, planted 2 rows with mixed northeast wildflower seeds and the rest were bulk zinnias and sunflowers. I didn’t get a soil test (which I should have – hindsight is 20/20, though how would I have known that covid would cause the soil labs to shut down in 2020?) I just wanted to see how things would grow after the years of conventional no-till. If I got some usable flowers out of it – bonus!

Well, things grew great! The wildflower rows, which were closest to the field (and so were to serve as a catch for any glyphosate drift) gave me cosmos, lupine, sweet annie, black eyed susans, interesting sunflowers, and various other things all season long, and the zinnias were a bumper crop, though the seed I used was kind of uninteresting, so they weren’t especially useful in anything except roadside bouquets. The sunflowers grew wonderfully. I don’t think I watered at all and it seemed like this would be a great space for the future. I was excited! My experiment worked! There were weeds, but they weren’t too terrible, which was good because doubling my space and keeping it hand-weeded wasn’t something I’d be able to do, plus by scattering the seed the spacing was so erratic it didn’t seem practical to hoe or use any tools to weed.

For 2020 I decided I’d do the same thing again, but this time I’d buy better seed and plant all the warm annuals I needed in that space. Once again, tilled my rows (keeping wildflower rows intact to preserve the perennials), and sprinkled seed. I bought 5 kinds of Benarys zinnia, 3 kinds of Queen Lime, 3 kinds of sunflowers, 4 types of celosia, 6 kinds of amaranthus, some really fancy expensive cosmos, and also some cool flower seeds that I planted out in March: larkspur, thlaspi, corn cockle, and some others I forget (because they didn’t come up at all…) So, money on seed and labor, energy in planning, and the most important: the expectation that I was growing a lot of what I would need for the season.

Weeds. SO. MANY. WEEDS. The most weeds ever. Weeds that grew faster than anything else I planted. So fast that they stunted and drowned everything – even the sunflowers. Weeds that sucked up the little moisture that we got – and we didn’t get a lot, because guess what? Drought.

How did I create this monster? Tilling, and lack of weed suppression. Basically, the second time I tilled I brought up all the weed seeds that had been hanging out in the soil the past 20 or so years, biding time, and I did nothing to stop them from taking over. Obviously, no glyphosate to kill them, but also no mulch, no landscape fabric, and no manual removal. I grew myself 6 145 ft rows of glorious gigantic weeds. Grasses, amaranthus, and all kinds of other stuff. Nature was like: yee haw! Let’s get some diversity into this joint!

The good news is that 2 of the rows (8 in total) were the perennial wildflowers, which still managed to grow, even despite my husband mowing one row down just as the flowers started to grow in June…

So, for 2020 half of my total growing space was a bust. I pulled a few flowers here and there from this space, but the point of it was to provide most of the flowers I needed for weddings and roadside arrangements and anything else I needed. Half. It was worse than when I only grew on half the space because this was land we’d put effort into as well as resources. It was also the land closest to the road so anyone driving by could see how crappy it looked. I was pretty relieved when we finally mowed it down.

All that said, now that I screwed that up so badly I have a clear path forward to make it better.

So – that’s my big failure!

Now for the little ones:

I grew some things I didn’t really like, and I won’t grow again. Lemonade cosmos (planted as plugs NOT in the failed roadside field) was too anemic looking for me, and the stems too droopy. Salpiglossis is beautiful but weird and sticky, and not prolific enough for me to want to grow again. Clarkia was a weird bubblegum pink color and the flowers grow from the bottom up. I didn’t like it. Bunny tail grass was cute, but was about 6” high and once the weather turned warm it dried up and died. I’ve decided I don’t like foxglove at all, though it grew pretty well for me, and I have very mixed feelings about clematis. I wish I’d grown all the colors of ageratum, not just purple, and the gorgeous fat frilled poppies I grew were so heavy that by the time their seed heads developed (which is the main reason I grew them) the stems were super twisty and no good.

I also planted my heirloom chrysanthemums in the shadiest spot I have in the hopes I could tease them into blooming early. That not only didn’t work (the early bloom) but the plants grew suuuuuper tall and were a real challenge to support. It was not the greatest year for dahlias, but I’m hearing that from lots of people in the area so I don’t think it was just me, though I planted mine way too close together and I didn’t pinch them so I’m betting that was half of the problem here.

There was some neglect – a place where I’m trying to get some shrubs going I just left to the weeds. I guess I’ll see in the spring if those shrubs are going to do anything. We also built a greenhouse that is in FULL SHADE in the winter, but that may be the subject of another post. It’s too depressing to consider now – in the winter – as it’s full of expensive ranunculus and anemone, which are frozen solid. That’s a pretty big failure, to tell you the truth, but again – another day.

How about you? Any failures you want to admit to? Go ahead, share. It’s freeing!

View all posts by Adrienne 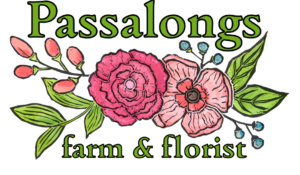 Click here to get an occasional peek at what’s happening at the farm!